Production of parts is preceded by a preparation process taking several weeks. The demand containing 3D models and drawings is considered and followed by a quotation to the customer; this quotation includes quoted prices and costs connected with manufacturing of the mould. In case the customer accepts the quotation, he shall send an order and a contract is concluded with the customer as well as with the particular tool shop to ensure manufacturing of the mould. After the mould is ready, first production attempt start. The technological process is adjusted and the mould is modified as necessary. After firing, the first products are checked and measured on the 3D measuring gauge. In case the measurement results comply with the drawings, the samples are sent to the customer. In case the samples are approved by the customer, regular production starts. In case the customer is not satisfied, adjusting of the technology and mould is repeated. 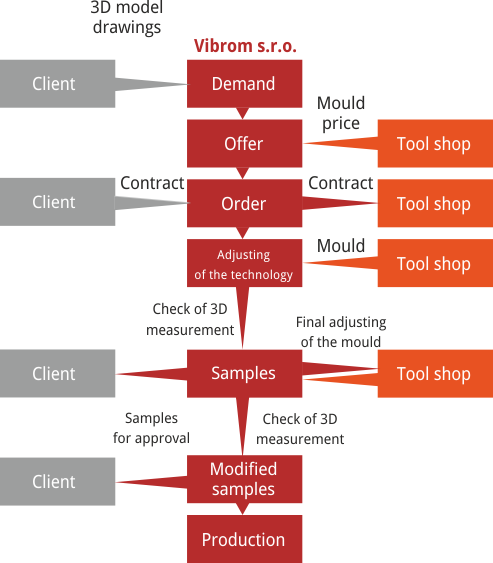 Production of parts for MIM as well as for CIM composes of several basic steps. The input raw material for injection is represented by feedstock, a mixture of ceramic or metal powder and binder. Feedstock is melted in the injection press worm and injected into a mould under pressure. From the form we can take out a very brittle part called “green body”. Some parts require removing of inlet jets or flashes arising in the dividing plane of the mould. Debinding is the next step. There exist many types of the debinding process; the company Vibrom s.r.o. uses mostly thermal and catalytic methods. This process stage removes binder from the part that remains brittle and is called “brown body”. 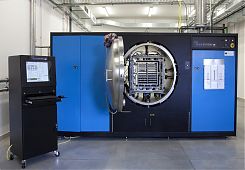 Before sintering the parts shall be put into proper positions and underlay as necessary to prevent any deformation. It is generally applicable that the parts are sintered slightly under melting temperature of the material from which the parts are made. A representative sample of the particular batch is measured to verify matching of its dimensions with the required ones.

The sintered parts are tumbled to achieve smoother surface. Tumbling is then followed by checks, performed in 100% extent in the company, i.e. each part is checked for defects, such as surface cracks and in case of metal parts, for subsurface cracks. Some products are provided with polishing of their functional surfaces, pressed into plastic holders or glued onto counterparts, etc., depending on requirements of customers. 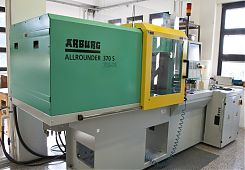